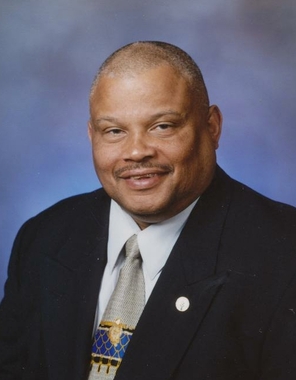 Back to William's story

Bill was born in Rushville, Indiana on December 15, 1952. He was a resident of Rushville, Indiana all of his life. He was the son of Louella F. (Bradley) and the late Joseph O. Goins.
A 1971 graduate of Rushville Consolidated High School, he served in the United States Army and received an honorable discharge in 1974. He also graduated from Connersville Area Vocational School where he attended from 1976 to 1980. He was on the Advisory board of Wernle Youth and Family Treatment Center Board of Directors as well as the Chairperson of the Wernle Development Committee. He was a member of the Indiana landmarks, Rush County Heritage, American Legion Post 150, Knights of Columbus, Elks Lodge and was President of the Rush County Boys & Girls Club Board of Directors and the Open Book Literacy Board of Directors. He was appointed to the Ivy Tech Board by Governor Evan Bayh from 1995 - 2004. He was also a member of the Rush County Association for Retarded Citizens and member for the National Association for Retarded Citizens. He was a member of the Rush County Foundation Advisory Board and City of Rushville Board of Works.
Bill was employed for 30 plus years at Visteon Automotive as a plumber/pipefitter and was very active with his union (IUE-CWA 919) where he held many offices. He was a member and trustee of CWA-IUE Union and vice president of CWA-IUW 919. He was also a delegate of the national convention, several district conventions, workshops and seminars. After the announcement that Visteon would be shutting its doors, Bill traveled to Washington, DC and lobbied successfully for federal funding to help his fellow employees obtain training and further their education through the Trade Act Program (TAA).
Bill was elected to City Council in Rushville from 1992 to 2003 serving as President for eight years and under five mayors. He was reappointed in 2008 and served as Council President. He also campaigned for Mayor in the 2012 election. One project Bill was extremely proud to have been a part of was the renovation of the Booker T. Washington School which he was instrumental in spearheading. The school is now a community center which serves Rush County in many capacities.
He was a charter member and President of the Fayette-Henry-Rush NAACP for more than 30 years and was also the First Vice President of the Indiana NAACP State Conference. He received numerous awards including the City of Rushville's Community Leader award, the City of Rushville's Man of the Year award, NAACP State President's award, NAACP State Loren Henry award and an honorary degree of Associate of Science in college community service from Ivy Tech Community College.
Frederic Douglas once said, "Man's greatness consists in his ability to do, and the proper application of his powers to do things needed to be done." This statement best describes the caring and compassion Bill has for his fellow men and women and the passion to make a change.
He was preceded in death by his father Joseph O. Goins and his brother, David V. Goins.
He leaves to cherish his memory three sons, Derrick (Kristie) Goins, Westfield, and Trevor (Kristy) Goins, Dallas, TX; their mother, Joan Hayes, Connersville and John (Michele) Egielske, Rushville; two granddaughters, Kierstan Goins, Indianapolis, and Kira Goins, Westfield; six brothers, Larry Goins, Jeffersonville; Terry (Lorna) Goins, Anderson; Ricky (Kim) Goins, Cincinnati, Ohio; Dennis (Desiree) Goins, Indianapolis; Kris (SoVonna) Goins, Atlantic Highlands, N.J.; two sisters, JoElla Hawkins, Marion, and Doris McDougal, Indianapolis; a very special friend, Becky Gibson, Connersville, and a host of very special nieces, nephews and cousins.
Services will be held on Sunday, January 19, 2020 at Rushville Memorial Gymnasium, 1201 Lions Path, Rushville, with Marlin Stewart officiating. Visitation begins at 11 am and services will begin at 2 pm. Burial will be at East Hill cemetery at 12:30 pm Monday, January 20, 2020. Memorial contributions may be made out to Ivy Tech Richmond Foundation to the Bill Goins Minority Student Scholarship Fund, 2357 Chester Blvd, Richmond, IN 47374.
Published on January 13, 2020
To send flowers to the family of William Ray Goins, please visit Tribute Store.

Send flowers
in memory of William

A place to share condolences and memories.
The guestbook expires on April 12, 2020.

Kimberly Guard
Bill, Will be missed. He was such a great friend to Ivy Tech and to the nursing program. I always loved to see his excitement and pride when we would see the nursing graduates at their pinning ceremony.
Leslie Krammes-Osborne

A memorial tree was planted in memory of William Ray Goins.  Plant a tree

Bill Krammes
Growing up in Rushville, and looking up to those working hard to make a difference - Billy Ray was such a lighthearted, enthusiastic young man. So many memories of his life as viewed from a young man looking for role models. His family is such a blessing to Rushville, my prayers and thoughts are with you and yours.
Cathy Long
My prayers are with the family during this difficult time. Thank you Mr. Goins for your contributions to the community. You made a difference and helped to change many lives.
Traci Riddell-Barnes
To Derrick and Trevor I am so sorry to hear of the loss of your Father. I will keep you in my prayers. Big hugs to you both.
Love,
Traci
Courtney Bradley Tyler
So sorry to hear about the passing of cousin Bill. Sending prayers and condolences to the family.
John floyd
Worked with Bill in Machining at Visteon. Pleasure to work with. Rest In Peace my friend
John floyd
Work with bill in machining at visteon , a pleasure to work with. Rest In Peace my friend.
Jim and Jackie Callane
William. We have lost a great friend who we have greatly admired. You will be missed by all that know you and call your their friend
View all