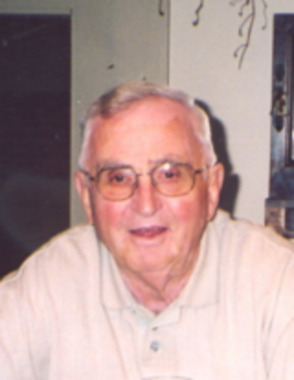 Wayman Milton Mahan passed away on July 28, 2019 at Hancock Regional Hospice in Greenfield, IN. Wayman was born March 9, 1929 in Washington Township in northern Rush County, just south of Raleigh and west of Nipp's Mill, to Fred J and Lois M.(Fry) Mahan. He attended school at Raleigh and Webb schools, and in 1951 joined the United States Army, serving in Germany during the Korean Conflict. On a blind date in March of 1953, he met Marjorie J. Welage and they married on November 7, 1953. Farming in Rush County was Wayman's life, taking pride in producing corn, soybeans, wheat , cattle and hogs. During his lifetime, Wayman was a member of St. Mary Catholic Church, Knights of Columbus and the American Legion. He was a volunteer fireman for Jackson Twp VFD for many years. He served on the board of directors for the Mays National Bank and the Rush County Farm Bureau Co-op. Wayman was a Rush County Commissioner for the northern district from 1987-1991 and with that was a member of the board of directors for Rush Memorial Hospital and ICAP. He also served on the board of directors for the East Hill Shrine Mausoleum until 2015. In March 2015, he flew to Washington DC on the Indy Honor Flight. Wayman enjoyed traveling, farming, playing euchre, farming and farming. Surviving are wife of 65 years, Marjorie; daughter, Christy (Doug) Hall, sons, Tom (Colleen), Kevin (Julie) and Mike (Mindy) all of Rush County, and Wayman A. "Tony" (Kristin) of Vincennes, IN. Grandchildren, Aaron (Trish) Mastin, Andrew (Jessica) Mastin, Emily (Jacob) Neal, Jacob Hall, Brad (Sarah) Mahan, Lauren (Chris) Shaney, Kari (Clint) McClellan, Kristin (JD) Scheumann, Jennifer (Jeremy) McDaniel, Douglas (Robert) Mahan, Blake (Chrisitine) Mahan, and Molly, Will and Tucker Mahan. Thirteen great grandchildren and one step-great grandchild also survive. In addition to his parents, Wayman was preceded in death by a brother, Delmas C. Mahan in 1957. A Mass of Christian burial will take place at 10:30 AM Friday, August 2, 2019 in St. Mary Catholic Church in Rushville, IN, with Father James Brockmeier will preside. Friends are welcome to visit from 3-7 PM on Thursday, August 1 in Moster Mortuary, Rushville where the Rosary will be recited at 2:30 PM. Burial will be in the Calvary Cemetery in Rushville. Memorial contributions may be made to the East Hill Shrine Mausoleum, St. Mary Church Foundation or to the South Knox Education Foundation-6116 E. SR 61, Vincennes, IN. 47591. Envelopes will be available at the mortuary.
Published on July 31, 2019
To plant a tree in memory of Wayman Milton Mahan, please visit Tribute Store.

Plant a tree in memory
of Wayman

A place to share condolences and memories.
The guestbook expires on October 29, 2019.

Restore the guestbook to view the 3 more posts by family and friends, and share a memory or message of condolence of your own.