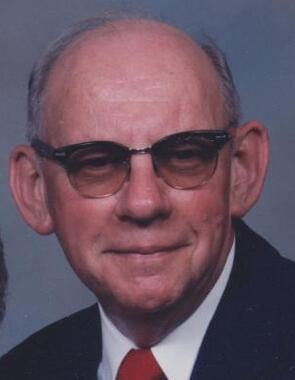 Back to Robert's story

Robert Heeb, 98, formerly of Rushville, Indiana, passed into the arms of His Lord Jesus, Wednesday, December 4, 2019 at 7:35 pm.
Robert was born on Sept 15, 1921 to Von and Lula (Pulliam) Heeb. He was the fifth of 9 children, all having preceded him in death. Robert was a 1939 graduate of Rushville High School.
Robert served in the Army during WWII. He was first stationed in Panama where he was assigned to search light and security detail for nearly 2 years. As the war was drawing to a close he and his unit reported stateside to Fort Benning, Georgia where they were being prepared to attack Japan. While there, he also served as Sergeant Quarter Master of supplies where he received a commendation for his work. He was honorably discharged in 1945 and returned to Rushville.
Following the war, he worked as a driver for Sadan Oil company, Kent shoe store and finally for the Rushville Post office. He retired in 1984 after 35 years of service.
On June 1, 1952, he married his loving wife of 67 years, Roselian (Cranford) Heeb. Together they had 4 children, John (Sheri) of Celina OH, Timothy (Jeanne), of Bloomington IN, David Heeb and Cynthia (Dale) Bolte from Columbus IN. He and his wife were grandparents to 10 grandchildren and looking forward to the arrival of their first 2 great grandchildren in the spring.
Robert was a devout Christian, living and sharing his faith daily. He was a Sunday school teacher and Elder for many years at Sexton Christian Church and later Rushville Church of Christ. While unable to attend church after moving to Columbus due to health, he was served by many fellow Christian's from the churches of East Columbus Christian and First Baptist Church of Columbus.
He was a loving husband, father, grandfather, uncle, son, brother and friend. He truly walked as Jesus commanded. He will be truly missed.
He taught us to lean on our heavenly Father in all circumstances. As we rejoice in his gift of eternal life, we grieve only for ourselves. He was a true gentleman. This is not goodbye but a "see you later". Until we meet again
Services will be held at 2 PM Saturday, December 7, 2019 at Moster Mortuary, Rushville. Friends are welcome to visit from Noon until service time on Saturday. Ron Bridgewater from East Columbus Christian Church will preside. Burial will be in Rushville's East Hill Cemetery.
The Rush County Veteran's Honor Guard will provide graveside military rites.
Memorial contributions may be made to the Wounded Warrior Project or to Our Hospice.
Published on December 5, 2019
To plant a tree in memory of Robert Heeb, please visit Tribute Store.

Plant a tree in memory
of Robert

A place to share condolences and memories.
The guestbook expires on March 04, 2020.

Shawn & Shelly Morris
Please accept our condolences for your loss. You are in our thoughts and prayers.
David and Joy Pace

America the Beautiful was purchased for the family of Robert Heeb by David and Joy Pace.  Send flowers

Kim and Mick Ryan Batesville, In

Written in the Stars was purchased for the family of Robert Heeb by Kim and Mick Ryan Batesville, In.  Send flowers

Louann Phares
Dave,
I am so sorry for the loss of your father. I know how hard losing our parents can be and the loss leaves a void in our hearts. My condolences to all of your family.
Debbie (McDermit) Karch
So sorry for your loss.
May God bless you and keep his loving arms around you during this time.
Mike and Brenda Gillespie
Dave, and all: you are in our thoughts and prayers.
Keith, Nevie and Emma Dewhirst
Thinking of the Heebs and Boltes at this very sad time. May you remember your husband, father, and grandfather with love, and may your memories bring you comfort in the coming days.
Susan Cullison Beaver
Dear Roselain I'm so sorry to hear of Bob's passing. Sending love and prayers for you and family!
Debra Fields
What a pleasure it was to meet and get to know Mr Heeb and his family. Their faith in the Lord was evident, as was their love for each other. Heaven is rejoicing.
Sue and Ric Floyd

Be My Love Bouquet with Red Roses was purchased for the family of Robert Heeb by Sue and Ric Floyd.  Send flowers

Janet (Safewright) Bolan
He was such a great Christian man and role model to me during my growing up years in Rushville. Prayers for the Heeb family!
View all