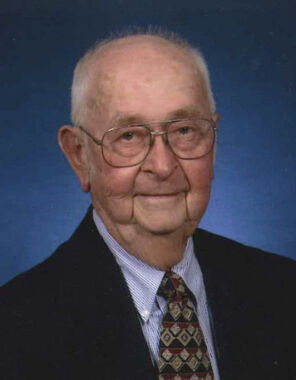 Back to Robert "Bob"'s story

Robert "Bob" Earl White, 91, of Carthage passed away Friday, February 1, 2019 at Hancock Regional Hospital. He was born August 20, 1927 in Rush County, the son of John R. and Mary (Brunson) White.
A lifetime farmer, he lived his whole life on the same farm where he was born. Bob was a graduate of Carthage High School in 1945. He attended Purdue Animal Science Winter course in 1948. Bob was a member of the United States Army, serving during the Korean Conflict. He was a former member of Charlottesville Friends Church and attended Greenfield Friends Church. Bob was the State 4-H Achievement and 4-H Alumni winner. He was a member of Rush County Rural Youth, State President in 1952, Chairman of Rush County Extension Advisory Board, Chairman of Rush County Soil and Water Conservation Board. He served as 1st Assistant at Indiana State Fair 4-H Beef and Sheep departments 1948-1952 and 1955-1964. Bob was a member of the Board of Directors Indiana State Fair 1964-1972 and served as President of Board in 1971. He served on Charles A. Beard Board of Trustees for 17 years and served on Board of Directors of Rush County REMC from 1976, served as Secretary, Vice President and President, Vice Chairman of Rush/Shelby Energy since its creation in 1999 until retiring in 2013. He served on Indiana Statewide Board and received Certified Director's Award from the National Rural Electric Cooperative Association. He received the Sagamore of the Wabash from Governor Frank O'Bannon as a result of his service. Bob was a Gold Member of the Lewisville Masonic Lodge 382, a member of Scottish Rite, Indianapolis Valley and a lifetime member of American Legion Post #150 in Rushville.
He is survived by his wife of 68 years, Barbara Faye (Meal) White, children, Melinda (JB) Vogel, Mark (Diana) White, Michael (Vanda) White and Melissa (Richard) Higgs; seven grandchildren, Gregory Vogel, Douglas (Jessica) Vogel, Emily Higgs, Allison Higgs, David Higgs, Anna White, Ruby White and was awaiting the birth of his first great-grandson.
Services will be at 10:30 A.M. Saturday, February 9, 2019 at Hinsey-Brown Funeral Service, Knightstown Chapel with Pastors Rick Schoeff, J. Stanley Banker and Rex Jones officiating. Burial will follow in Walnut Ridge Cemetery in Carthage. Visitation will be from 3:00 P.M. to 7:00 P.M. Friday, February 8 at the funeral home. You may express condolences or share a memory of Bob at www.hinsey-brown.com.
Memorial contributions may be sent to RCCF for the Rush County Community Fund, 117 N. Main St., Rushville, IN 46173 or you may give at www.rushcountyfoundation.org.
Published on February 4, 2019
To plant a tree in memory of Robert "Bob" Earl White, please visit Tribute Store.

Plant a tree in memory
of Robert "Bob"

A place to share condolences and memories.
The guestbook expires on May 05, 2019.

Restore the guestbook to view the 2 more posts by family and friends, and share a memory or message of condolence of your own.