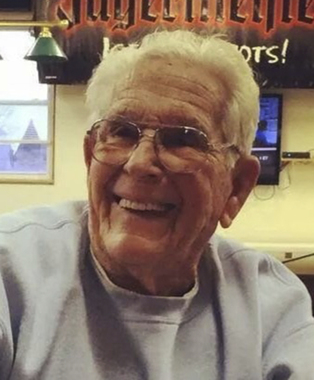 Back to Larry's story

Larry Eugene Woods (Gene) passed away peacefully, surrounded by family on Monday, February 10, at the young age of 100.
Born March 12, 1919 in Marion Co, to Herbert & Helen (Crawford) Woods. The family moved to Rushville shortly thereafter.
A 1937 graduate of Rushville High School, he played basketball and ran track, where he continues to hold the school record for the 100 years dash. Larry become a proud Marine, serving in the South Pacific during WWII. After an honorable discharge at the end of the war, he returned to Rush Co, where he remained to raise his family.
Larry eventually retired from Ford Motor Company in 1981, after 30 years of service. Retirement never slowed him down though. One of his favorite things was woodworking; many of his projects can still be found throughout Rush Co., including the courthouse. He picked up golf as another hobby at the young age of 72 and continued to play until the age of 96. You could also find him on Saturday nights dancing at Raleigh. Larry and Betty met while working at Ford. They were married September 30, 1961, and were happily married for 58 plus years.
He is survived by his children, from his first marriage, Sandy (Gerry) Woods Shores, of Florida; Rick (Karen-Alice) Woods, of Florida; and Don (Chris) O'Neal, of Indianapolis; and Debbie O'Neal, of Rushville. He was a loving and proud grandfather to 10 grandchildren & 18 great-grandchildren.
Larry was preceded in death by his parents; his sister, Doris; two sons, Michael and David; and one grandson, Kenny.
Visitation will be Friday, February 14, from 4-8 pm, at Mosters Mortuary. Funeral services will be held Saturday, February 15, beginning at 10 am. Burial immediately following at East Hill Cemetery. In lieu of flowers, donations can be made to the charity of the donor's choice. His family is very grateful for the loving treatment provided by Our Hospice, in addition to the constant love and support from dear friends.
Published on February 10, 2020
To send flowers to the family of Larry Eugene Woods, please visit Tribute Store.

Send flowers
in memory of Larry

A place to share condolences and memories.
The guestbook expires on May 10, 2020.

Billy Reeves
Gene was a very special person who was always ready to help. He will be greatly missed by friemds and family..
View all