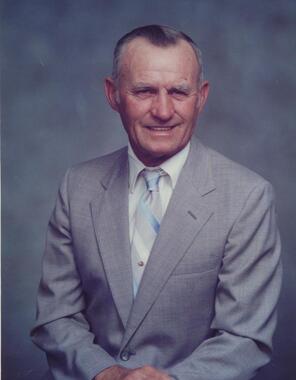 Back to Alfred's story

Alfred V. Carter, 96 of New Palestine, passed away on January 5, 2020 in Morristown. He was born on November 25, 1923 in Rush County, IN, one of four sons to the late Ray E. and Leoma (Wright) Carter. Alfred was a 1942 graduate of Bentonville High School. Alfred attended New Heights Christian Church in Connersville.
A veteran of World War II, he served in the U.S. Army, with the 62nd General Hospital as a technician fourth grade. He served from March of 1943 until his honorable discharge in March 1946. He was a lifelong farmer in Fayette County. In June of 1948 he married Joyce E. Wood, they had three daughters, Kathy, Becky and Carole. In 1988 he married Margaret Buhler.
Alfred is survived by his, daughters, Becky (Dale) Darrah of New Palestine and Carole Heidlage of Indianapolis; 6 grandchildren, Andrew, Mathew, Mindy, Stephanie, Noah and Emily; 8 great-grandchildren. He is also survived by his step children, step grandchildren, and step great-grandchildren.
Alfred is preceded in death by his parents, and brothers, Eugene, Floyd, and Rex Carter; daughter, Kathy Carter George and grandson, Travis Sexton.
Services will be held on Friday, January 10, 2020 at 1 PM in Moster Mortuary, with Pastor Ryan Phelps presiding. Friends are welcome to visit the family from 11 AM until the time of service in the mortuary. The Rush County Veteran's Honor Guard will provide graveside military rites. Burial will be held in Bentonville Cemetery in Fayette County, Indiana.
Published on January 6, 2020
To send flowers to the family of Alfred V. Carter, please visit Tribute Store.

Send flowers
in memory of Alfred

A place to share condolences and memories.
The guestbook expires on April 05, 2020.

Diane Drozd
Al was a wonderful step dad. He was one of the kindest and gentlest people I have ever known. Time spent on his farm is filled with great memories. He and my mother had a special relationship for almost 25 years.
He is going to be missed.
Jan
Al was the most honest, straightforward, caring man I’ve known, besides my husband. He will be missed so much.
Deedee, Britt, Jan and Scott

Gracious Lavender Basket was purchased for the family of Alfred V. Carter by Deedee, Britt, Jan and Scott.  Send flowers